I love this quote, but I think it is a love I gained in retrospect rather than in the moment of hardship.  There have been many in my life, and some prolonged.  But when I look back, I see all the extraordinary moments that were being built, though I didn’t see it at the time.  Despite how many times I have seen miracles happen, I still often fail to remember those possibilities when I am in the thick of pain or struggle.  Just when I think I am “going down for the count,” something happens to redeem the struggle. It doesn’t take it away completely, of course: What is done is done, or what is lost is lost.  But there is often some kind of hidden purpose–a grit, a grace, a gift that comes in spite of it, and maybe even because of it. But it does come . . . eventually. 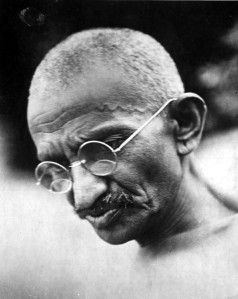 Man often becomes what he believes himself to be. If I keep on saying to myself that I cannot do a certain thing, it is possible that I may end by really becoming incapable of doing it. On the contrary, if I have the belief that I can do it, I shall surely acquire the capacity to do it even if I may not have it at the beginning.”  ~ Mahatma Ghandi

I also love the above quote.  And since we all know what Ghandi ultimately experienced, his words above we know to be true.  It was not wishful thinking, nor did he put blinders on to the dark side of life. He was speaking about something far more substantial than that – yet so practical and so . . . possible  . . . even for ordinary people like me or you, or most of us.  He knew the dark side of life fully, and fought it with enormous courage — and with nothing more than his willingness to try.  From these humble and ordinary beginnings, he did extraordinary things.

I don’t have to rise to the magnitude of what Ghandi did to experience his truth in my life – none of us do; that is what makes this all so extraordinary.  I matter — and everything I have struggled with in my life matters.  It all matters because we matter.  Each moment we experience has meaning and purpose.  It just takes time to find it sometimes.  Hardships often hold the substance of destiny. We are the alchemist of those possibilities, with grace and love to light the way.

What man actually needs is not a tensionless state but rather the striving and struggling for some goal worthy of him. What he needs is not the discharge of tension at any cost, but the call of a potential meaning waiting to be fulfilled by him.  – Viktor Frankl

Victor Frankl was an Austrian psychiatrist and neurosurgeon who had barely begun his professional career when he was condemned to die, along with millions of other Jews at the onset of World War II.  During that time, Dr. Frankl was imprisoned in no less than four Nazi concentration camps, one of which was the most horrific and notorious: Auschwitz, where over 1,500,000 people alone died in its gas chambers. 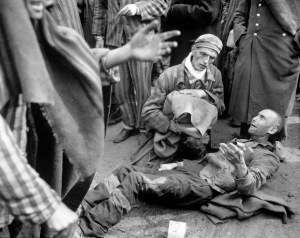 During the War, Dr. Frankl also lost his wife, his parents, and most of his family.  He miraculously survived this horror and afterward wrote a book about his experience (written in just under 9 days), entitled Man’s Search for Meaning.  To date, this influential book has sold over 14,000,000 copies and has been translated into twenty-four languages.  By many accounts it is one of the most important books of our time, and I agree.  This book was completely life changing for me and continues to deeply influence me.

In the forward to the 1992 edition of his book, Dr. Frankl reveals what drove him to write his book in the first place:

I had wanted simply to convey to the reader by way of a concrete example that life holds a potential meaning under any conditions, even the most miserable ones.  And I thought that if the point were demonstrated in a situation as extreme as that in a concentration camp, my book might gain a hearing.  I therefore felt responsible for writing down what I had gone through, for I thought it might be helpful to people who are prone to despair.

In summary, Dr. Frankl believed this search for meaning and purpose is the most important task we have in life and described three primary ways in which we find it:  (1) by creating a body of work or doing something we feel is important or relevant; (2) through love (a deep connection to someone or something other than ourselves); and 3) by finding meaning in our suffering.  While Dr. Frankl is quick to point out that suffering in and of itself is meaningless (and to be avoided if possible), if we do find we cannot escape our suffering, we attempt to find meaning in it. He writes that this act of choice will not only help transform the experience, but ultimately will give us the courage and strength to rise above it. 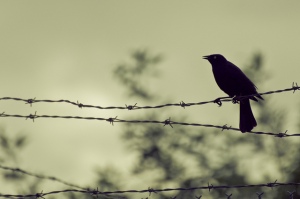 So how does this specifically apply to the act of writing?   Undoubtedly, Dr. Frankl was a brilliant doctor and clinician, and while he wrote many books from this point of view, his most powerful and influential book came from his own personal experience. Through the act of writing about his suffering, he exemplified for us his own guidance in how we find meaning in our own lives:  (1) he found meaning in his suffering (in his case, to help others, which also was an act of love); (2) through love (one example of which he relates in the book: how during a particularly terrible time in his imprisonment, his despair made him want to give up; but he found a mystical yet very real and present strength when recalling the love of his wife); and (3) he wrote a seminal book and created a professional practice and school of psychotherapy around what he learned from his experiences[1]. 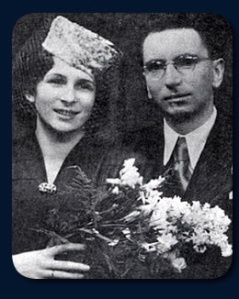 There is so much more to Dr. Frankl’s book and life’s work than I can adequately relate here, so please try and read Man’s Search for Meaning if you can.  It is an inspiring and beautifully written book, and one that I can promise you will touch, inspire, and encourage you no matter what your background or circumstance.  And of course, do “give voice and effort” to your own quest for meaning, whatever path yours may take.  Perhaps you will find that a life or two (or more) gets changed in the process: most notably, of course, your own.

With that, I will close with Dr. Frankl’s own closing words at the end of his book:

A human being is not one thing among others; things determine each other, but man is ultimately self-determining.  What he becomes—within the limits of his endowment and environment—he has made out of himself.  In the concentration camps, for example, in this living laboratory and on this testing ground, we watched and witnessed some of our comrades behave like swine while others behaved like saints.  Man has both potentialities within himself; which one is actualized depends on decisions but not on conditions.

Our generation is realistic, for we have come to know man as he really is.  After all, man is that being who invented the gas chambers of Auschwitz; however, he is also that being who entered those gas chambers upright, with the Lord’s Prayer or the Shema Yisrael on his lips.

For those who have read the book, please leave your own thoughts and reflections in the comments.  I would love your help in honoring this beautiful man and his work.

Photo Sources (in order of appearance):